Leaving Canada wasn’t all of that tough this time.  We researched what -26 degrees looked like and decided that this was the perfect time to go to a very hot country.  You guys that stayed here must really like winter.  There was a day that it was colder in Cambridge then it was in the North Pole.  Anyways, our time away.

Sara and I had a wonderful time in the Philippines.  The travel time was a tad long.  over 50 hrs in total to get back. Needless to say we were exhausted.  Some people ask whether it was worthwhile.  Of course it is.  It’s painful at the time. You are doing something that you will never forget.  That is always worth every minute.

We had a stop over in Abu Dhabi so we thought we would take a look at some of their famous sights.  Abu Dhabi is very interesting.  They are obviously very rich on oil.  Their country looks like a what a 12 year old boy would create if he was given a few billion dollars.  Ferrari amusement park, red bull plane rides, safari jeep rides, gold bar vending machines.  Sheikh Zayed Grand Mosque was breathtaking.  It was put together flawlessly, and is one of the most beautiful structures that I have ever seen close up. 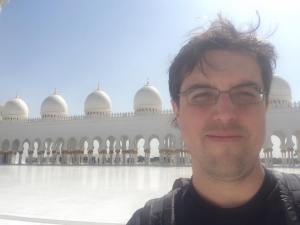 One thing I didn’t realize was that this was going to be a foodie trip.  While watching all of the travel shows they didn’t explain that the Philippines had such a diversity in food.  Obviously known for seafood.  They have a mix of Indian, Spanish, and American food.  It was wonderful trying so many different foods for such a cheap price.  On average our food bills would be less then $15.00.  This included two meals, a couple of drinks, and desserts.  “Should we splurge on the piece of lemon pie, it’s 55 pesos?”  This was a common question.  That’s about $1.25 American.  The answer is always yes in this situation.

Every sign is in English.  This is another beautiful thing about this country.  Not having to deal with the language barrier makes the trip so much more enjoyable.  I was also surprised that we didn’t get hassled as much as I thought we would as tourists.  Usually they see a giant white man that comes out of an airport wandering around fitting in as well as the 5’9″ girl at the grade 8 dance, they flock.  Most people were courteous, and genuinely eager to help us along our way.

The scenery is gorgeous all throughout the Philippines.  Once you get out of the highly populated areas everything looks like scenes from movies.  It was difficult to decide on pictures that I was going to post.  The rice terraces, chocolate hills, endless beaches, and the food.  Oh the food.   We decided to get out of Manila right away.  It’s a city of 25 million people.  Smog and pollution is common.  We traveled to Banaue as soon as possible.  They were known for their endless rice terraces.  We took a little trip to a hot spring.  Little did Daryl know there was going to be a 15 minute walk through the rice terraces while having drop offs of 20 feet.  Daryl has a “tiny” fear of heights.  I had to take the guide by the hand and have him help me across the rice terraces.  It wasn’t the manliest moment of my life.  I am still alive, and my underwear is fine. 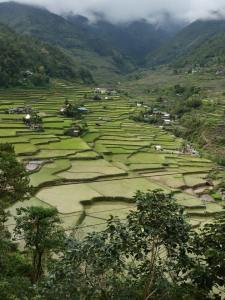 We then ventured to the beautiful Sagada.  It’s more in the mountain part of the North Luzon island in the Philippines.  It’s a bit cooler then other spots.  This might have been the best part of the trip.  We met a fantastic couple from Manila.  Juli and Bryn.  We also met a great guy in Abraham from New Mexico.  We decided to venture through the village and eat everything.  Vegetarian, banana yogurt pancake, lemon pie, chicken adobo, and many others that I cannot remember, but my stomach does.  We stayed at a hostel that was a bit of a climb to get to, but had one of the best scenery’s in the village.  The second day there was the sight seeing day.  We visited a historic church and the well known hanging coffins.  It was a bit of trek to get a look at the coffins.  Seeing this unique sight made it all worthwhile.  We also saw cows on a baseball field? 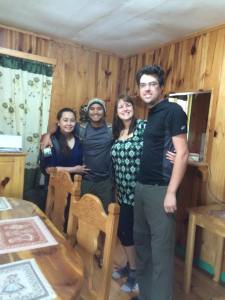 The first part of our trip was to see as many things as we possibly could.  We packed it all in there.  Hours on buses, and trying to fight past the time change.  The second half of our trip was relaxation time.  We slowed down the pace, and enjoyed ourselves and the sunshine.  There were still many sights to see, but there was no need to push ourselves at the pace that we were going at the start.

There were many highlights of Bohol.  We rented a trike and a guide for the day to take us to all the sights that we wanted to go.  We were planning on doing it over a few days, but since our guide had a package in place to take us to everything that we wanted to go to in one day, we had to take full advantage of that.  We loaded into his trike, squished, like can’t feel my legs squished.  The Chocolate Hills and Tarsier Conservation Area were the two highlights for me.  Sara seemed to like the area with the giant python.  As most people know Pythons suck, and don’t deserve my love.  Our guide was fantastic telling us all about the history of Bohol, and would never say no to us wanting to have our pictures together.  He also had the only vehicle that we know of that had a stereo inside.  He had Bon Jovi to soundtrack our time here. 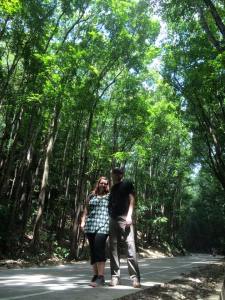 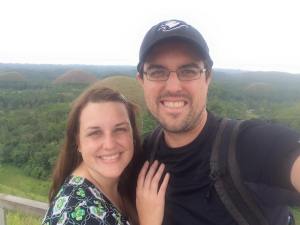 We decided to enjoy some time at a resort after all of this traveling.  This isn’t your typical resort.  It wasn’t on a beach.  It wasn’t all inclusive.  There was no buffet.  It was on a river that you could walk on the other side and wander right through local villages.  They would always wave to you, and say hello. The National sport is basketball for those that don’t know.  We walked past a basketball court and I thought I would test out my hops by trying to dunk the net.  There was a local kid behind that was watching in amazement as I just seem to float to a monster dunk.  He shook my hand, and asked if I was able to play later.  Be the point guard for their local team.  I had to decline of course because of our hectic travel schedule.  What could have been? 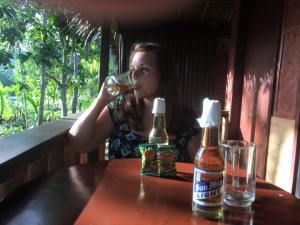 After spending a few beautiful days at the resort we decided to go back to reality.  Now reality is a tiny house at a Coconut Farm a few minutes from a beach.  Not so tough.  The Coconut Farm had flavour.  There were statues of past Presidents of the Philippines, an extremely shaky sky walk around the farm, and many areas for hammocks and relaxation spots.  They had wonderful food, and very helpful people that worked and stayed there.  Made our time there so easy. 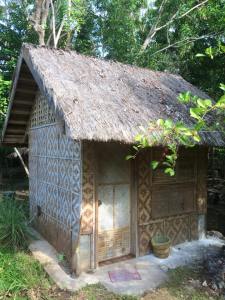 We were told that we had to go to the Bohol Bee Farm.  They were known for growing all of their own food.  They were also known to have the best coconut milk ice cream in the world.  On both instances they were 100% correct.  Sara was almost convinced to start a new life in Bohol as a weaver.  We had a wonderful guide that gave us all the information we could handle on how they do things on the Bee Farm.  Sara was of course the browner that got all the questions correct.  We got to have an up close and personal look at a box with over 60,000 bees in it.  We were stung 63 times each, but it was well worth the 6 second look.  I feel as though coconut milk ice cream is like stem cell research.  How are we not eating this ice cream all of the time.  It is 1000 times better then cows milk ice cream.

On our last day we decided to finally visit the beach.  Getting sand everywhere, being burnt by the sun, walking on sharp rocks, and being pulled in by the undertow by the ocean doesn’t really suit this cat.  But we were in a spot of the world that have 7000 islands.  We thought we should really check out the beach.  It was beautiful scenery and the ocean was actually pretty nice once you got past the killer rocks.  I found it funny watching many Asian ladies doing photo shoots around the trees in front of the ocean.  Multiple stereotypical moments were witnessed.  Sara and I decided to get a day pass to the resort so that we could use their beach area, towels, and received a credit for their restaurant.  It was a smart decision.  Not only was their food delicious, but they had the best mango daiquiris that a manly man could ever ask for.  For the most part Sara and I had stayed away from the sun enough not to get burnt.  This is the day that we faltered.  It was a hot walk back to the Coconut Farm.  Sara stole my hat from me so her tender head wouldn’t get burnt.  I turned into Ghost Rider.  The next day we had to check out from our tiny house at the Coconut Farm and were back to reality. 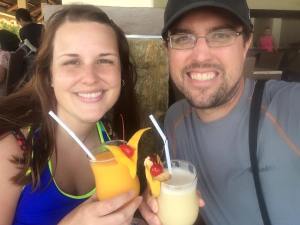 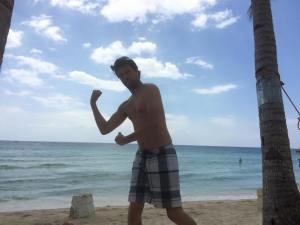 Overall I really liked the Philippines.  We really only scratched the surface of it.  It was a fantastic experience, and even though a $300 flight from New York is highly unlikely again.  Sara and I will definitely keep our eye out for another deal to this beautiful country.