I have started a new job, it is a completely different life working from a desk and not having to deal with the general public. Also 9-5, Monday-Friday isn’t bad (hands behind head, feet up, basking in sun.)

If you would like to have a mixture of transportation back to the 90’s and shockwaves of remembrance of the movie American Pie – go to see Treble Charger play. It was like being in a mediocre time-machine.

If you have not gone to see the beer exhibit at the Museum on Homer Watson in Kitchener and are a fan of beer do it. Do it now. Halfway through the exhibit your mouth starts to water, and your car cannot drive fast enough to a local brewery. They give you a fantastic background of the history of beer in the tri-city area. I started drinking OV again and grew a ‘80s mustache within 26 seconds.

Sara and I have decided that we will not rub any contest wins in people’s faces on Facebook. I won $500.00 last week for tweeting about my favourite small business. Blogs were not included in this agreement.

We were gracious recipients of free Tragically Hip tickets from a couple of great people for their Monday show at the Aud. It was nearly a perfect Hip concert for me. Played everything from about ’97 and before. Gord Downey is a very strange man. There isn’t a drug that makes people dance quite like that.

I want to be involved in one of those strange car chases from the late ‘70s. You know the ones with the giant boats flying around corners, fish tailing, with no one ever really catching up to the other person. Well it looks like they are catching up, but the next scene they are still the same distance behind.

We are thinking about joining a gym. What’s important to me about a gym? That they have a TV at the treadmill that plays sports or science fiction with closed captioning. That is all. Oh, and no grunting please.

The Missing is a brilliant British TV show about a child that gets abducted from a very public area, and the father is trying to piece together the case years later. Everything is excellent in this show. Give it a watch. 8.8/10

With certain people’s opinions about shows you should be able to stop them before they even begin to speak. Or something shocks their brain when they begin to give their opinion if they have watched every one of the Transformers or Twilight movies.

In the ‘80s the true American Hero was a dude that carried a two-by four of wood that had either had brain damage or had an extremely low IQ. He used to wave his two-by-four yelling “ohhhhhh.” This was who we identified America with. Happy 4th of July to our neighbors from the south. 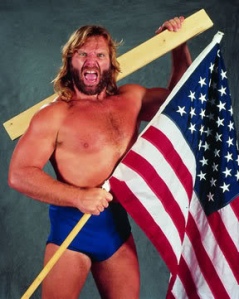 The most dangerous time to talk to a person and asking for a response, is when they have mouthwash in their mouth. Drink it, bad. Spit it out, bad. Allow a small amount to go down your chin, bad.

There is not an area in the city of Kitchener on Saturday morning that have people standing in line that look angrier than the Service Ontario line. These people are on the edge of a freak out episode. This is the main reason driver’s license pictures always look like prison pictures.

Top 3 nerve racking moments behind the wheel of a car that aren’t actually that dangerous of a situation, but we slow down anyways.

1. Plastic bag flopping through the air towards you like a bat out of hell
2. People in the next lane driving the exact same speed as you
3. Person off the side of the road with their four ways on urinating

Don’t ever use the words “hungry” for a joke if the person is from the country Hungary. It will never work. And you will look like a foolish man or woman with beef noodle soup running down your face.